Redheads with contrasting black masks have always been a favorite of mine and a staple in the Bullistik breeding program. If you have ever

owned a French Bulldog ‘redhead’, you don’t have to be told that they are different.  Much like the wrap that human redheads get, that persona holds true in the French Bulldog breed:  HOT HEADS!

Reality is that you are safe just as long as you don’t p*ss them off…….hahaha.  Okay, we all know that frogdogs are not naturally mean spirited or ill-tempered, but let’s just say that redheads are not pushovers.  They demand respect, and bow to no man, dog, cat, etc.  I, for one, admire that stance, and support their brass tacks attitude!

SpitFire, as a redhead, is special to me on that alone, but more importantly, she is a daughter of my gorgeous chocolate fawn girl, Decadence, and my favorite bred-by, black & tan stud dog, Thrash. 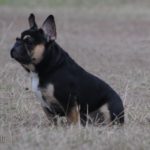 We are thrilled that our RED HOT Temper Tantrum inherited her mama’s chocolate gene ‘b’ and her sire’s tricolor gene ‘at’.  But, more importantly, she has that extreme flat face of her mother’s, the stunning body from both parents, and the combined health genes of both sire and dam. 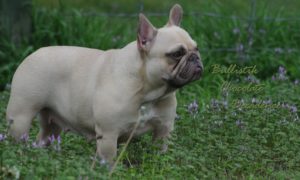 My hope that SpitFire would produce one or two very special chocolate  kiddos that have all the great attributes of her, Decadence, and Thrash, and the outstanding chocolate stud that we planned to breed her to became a reality in August 2019.

Her boyfriend was kept under wraps at the time, but he contributed everything I could have asked for in a mate for my darling hothead, and is a Bullistik descendant, and that makes Maverick and what he was able to contribute to this  breeding with SpitFire so incredibully exciting!

It took quite a bit of willpower to keep his name under wraps and not plaster his gorgeous self all over SpitFire’s page.  BUT!  the only secret is the one you tell noone, so I was vigilant in keeping quiet until the Maverick x SpitFire litter 6 pack arrived.

AND, believe it or not, I kept 3 of the 6 pack here at Bullistik®.  Malice (ayat, bb), Prism (ayat, Bb), and Jealousy (ayat, bb) are amazing and everything I hoped for from the ‘special’ breeding. 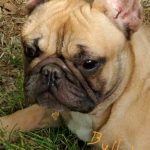 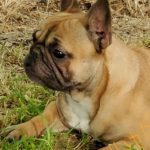 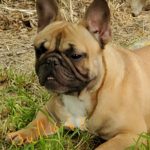 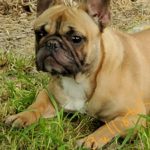 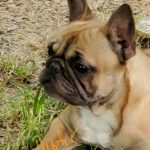 SpitFire’s next breeding will be with MILKDUD, my chocolate trindle boy that is a half-brother (same dam) of Mavericks.  Going to be another exciting litter of hopefuls.